Watercolour dated 1878 of a Church and Churchyard in Autumn 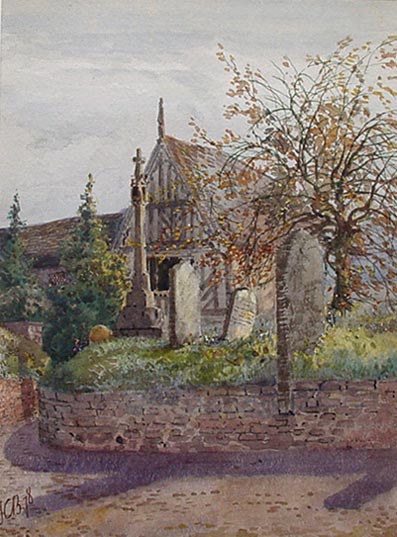 Artist Biography:
Thomas Campbell Bennett (1858 - 1948) Born at Enville in Staffordshire on the 17th of January 1958. His father was the village schoolmaster and a talented musician and first cousin to Sir William Sterndale Bennett, the composer, and protégé of Mendelssohn.

Thomas was a gifted artist and in his early life associated with the Devon painters Widgery, Pike and Ager. In 1886 he married Elsie Dudley of Kinver, Staffordshire whose ancestor was Chancellor to Queen Elizabeth 1. They moved to Cornwall in 1888 and bought Hingston House (now a Hotel) in the village of St. Ann's Chapel near Gunnislake. This was home for 30 years and he taught art at Pendruccumbe School in Launceston, where his daughter Marjorie was a boarder. Cam', as he was always known (his mother was one of the Scottish Campbell's), and Elise had three children, but the eldest died in infancy. His daughter, Marjorie was his constant companion throughout his life, particularly after Elise died comparatively young in 1902.

Most of his life's activity was devoted to the practice and teaching of art. During the first world war he joined the Home Defence, the forerunner of the Home Guard of the later war, where he held the rank of sergeant. After the war his daughter married Edmund (Ted) Palmer, son of a farmer at Colcharton, Tavistock and many of his paintings are of that farm. Hingston House was sold in 1923, and Cam, Ted and Marjorie moved to Bideford. For the next 25 years they all lived happily in a bungalow they had built called Spindlewood which overlooked the Torridge.

He was a founder member of the Westward Ho! Art Club and a well known figure in Bideford, with his Balmoral hat, knickerbockers and goatee beard. "He was a man of great integrity and eternally youthful. He died at almost 91 years on the 7th of October 1948, and is buried in the churchyard at St. Ann's Chapel".

Other works by Thomas Campbell-Bennett