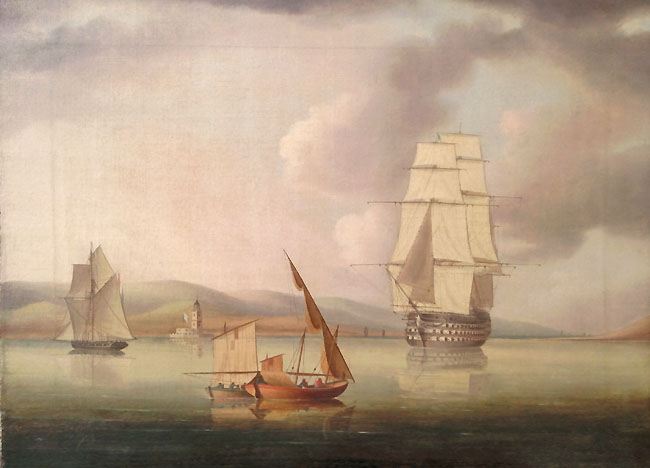 Thomas Buttersworth Jnr (5 May 1768 – November 1842)
A seaman during the Napoleonic wars period, became a maritime painter producing works to commission, and was little exhibited during his lifetime. He was born on the Isle of Wight, England. He enlisted in the Royal Navy in London in 1795, and served on HMS Caroline during the wars with France, then was invalided home from Minorca in 1800.

The National Maritime Museum in London has 27 watercolours by him, several of which are mounted on sheets from 18th century, printed signal and muster books.

He went on to paint numerous naval battle scenes and pictures such as the ‘'Inshore Squadron off Cadiz in 1797'’ which are thought to show scenes he witnessed. On being appointed Marine Painter to the East India Company he painted ship portraits on commission. It had been thought that he died in 1830, but recent research has found that he painted Queen Victoria’s visit to Edinburgh in 1842 before he died in London later that year.

He was the father of J. E. Buttersworth who moved to the United States around 1845, and settled in West Hoboken, New Jersey and also maintained a Brooklyn studio in 1854 and is credited with some influence in introducing the English School of painting to the USA.

Returning to England in 1851 for the Hundred Pound Cup race that took place on 22 August 1851. His sketches and paintings of that yachting competition provide the definitive record of events in that benchmark season of sailing. Buttersworth’s paintings of the 1893 Vigilant vs. Valkyrie II Cup match, done one year before his death, completed the chronicling of America's Cup races by oil painting just before the advent of successful photographic imagery. He was inducted into the America's Cup Hall of Fame in 1999.