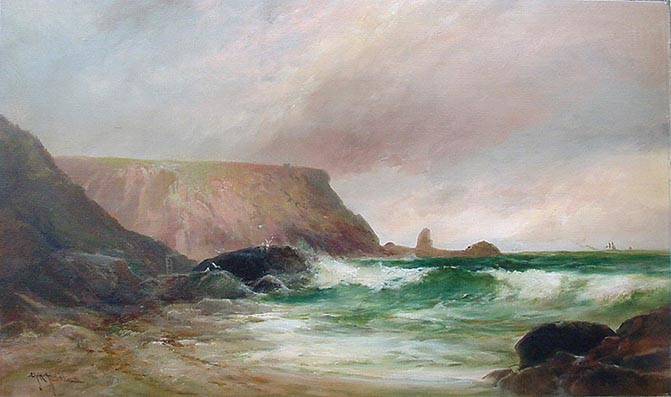 Artist Biography:
George Henry Jenkins (fl. 1870 - 1910)
A West country artist who painted extensively throughout Devon and Cornwall in both oil and watercolour. His subjects are all topographical featuring landscapes and seascapes. Examples of his work are held by Plymouth City Museum and Art Gallery. He lived at 10 Saltram Terrace, Plympton, Plymouth from 1873 to 1880. He and his wife Hannah had their seven children baptized at Plympton St. Mary's church (5 of them in 2 days on the 10th and 11th of December!) His second child was called after him and also became an artist, with a very similar signature his work can be distinguished by the use of more vivid colours.

He exhibited at the Society of Western Artists, Plymouth Arts Club and at the RWA in Bristol. He showed a total of 20 works at the RWA between 1892 and 1895 at the Annual Winter Exhibitions, subjects included On the Lledr, North Wales and in 1892 King Arthur's Castle, Tintagel. He did not appear to exhibit in London but did show Trawlers entering Plymouth Sound at the Dore Gallery in an exhibition of West country artists c.1900. He also exhibited two Dartmoor views at the Elands Gallery in Exeter in 1907. Jenkins Jnr appears to have had some pictures published as postcards by Raphael Tuck in the Picturesque Devon series.

Other works by George Henry Jenkins