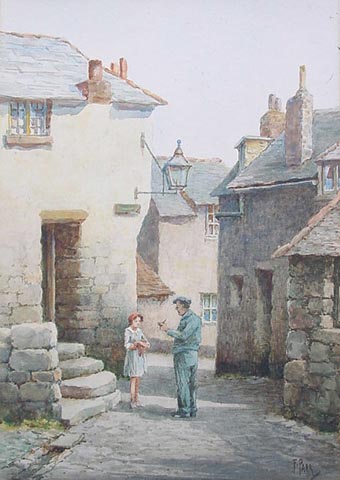 Parr was a prolific artist, who painted watercolours of picturesque corners of fishing villages in Cornwall and Devon, but, as he is not listed in any of the standard Dictionaries, very little was known about him. Auctioneers/dealers have given widely divergent dates for his career, with many believing, due to the type of subject that he depicted, that he started to flourish as a painter as early as 1880, some seven years before his true birth date! The Exeter art historian, April Marjoram, has solved the mystery.

Parr was born on 13th November 1887 in Exeter. His father, Frederick William Parr, was a tailor, who himself had been born in Exeter, whilst his mother Rosa (née Chalk) had been born in Martock, Somerset. At the time of the 1871 Census, a Mary Cornish was staying with the family at their home, 24 Blackall Road, St David’s, Exeter, and so the artist’s forename ‘Cornish’ was probably a family name. By the 1891 Census, three year old Frederick had two younger siblings, Lillie aged 2 and Stephen aged 8 months.

In 1903, both Frederick, then living at 32 Blackall Road, and his brother, Stephen, still living with their parents at 24, Blackall Road, won prizes in a local drawing competition. Indeed, it was Stephen who first embarked on an artistic career, as, in the 1911 Census, he is recorded as a lithographer. Frederick, then aged 23, on the other hand, was working as a railway clerk, having started as an apprentice at the goods department in Fore Street, Exeter in 1902. He had married Hyacinth May, in 1910, and had a young daughter, Inez Beatrice (m.1934, d.1967).

He resigned from the railway service on 24th November 1914, presumably to serve in the War, albeit his service record is unknown. Whilst, during his time as a railway employee, Frederick may have been able to make use of the railway network to do some sketching in Cornwall, his painting career seems to have started after the First World War and there are references to him exhibiting paintings at Eland’s Gallery, Exeter (a stationer’s shop that held art exhibitions twice a year) in 1922 and 1924.

Although he rarely dated his work, one painting is dated 1929, and presumably he worked on into the 1930s. One note refers to him sharing an Exeter attic studio with Herbert William Hicks (1880-1944) for a time. Parr’s St Ives subjects tend to suggest that he was working there in the 1920s. Wharf Road has been built and the dress of the fishermen looks post-War. Invariably, he included in his subjects locals at work, placing them in the vicinity of quaint old buildings, whilst in the background can be seen glimpses of activity in the harbour.

In St Ives, therefore, favourite scenes were Westcott’s Quay, Bethesda Hill, Fish Street, and Pudding Bag Lane. He also painted in Norway Square and The Digey. His interest in old buildings and the days of sail, rather than the newly motorised fishing boats, has probably led to his work being dated earlier than it was. Whilst verging towards the ‘chocolate box’ subject, Parr nearly always made his views contain something of social historical interest.

Presumably, because he was contracted to sell all his work under the name of Parr through a particular outlet, he occasionally used a pseudonym, F.Beni.
He exhibited at the Elands Gallery, Exeter in 1924.

(With thanks to April Marjoram and David Tovey)

Other works by F Parr